Skip to content
Get 10% off modelling orders over £50 on The Tank Museum's Online Shop >>Model Show programme released - find out what's on, when >>Find out how we're celebrating our centenary - baking competition, concerts, and more>>

Part VI. The quirks of the tank are revealed.

Tiger 131 was captured in April 1943.  In September 1951 it was passed to the Tank Museum where it soon became one of the most famous vehicles in the collection.  In 1990 it was decided to restore the tank to running order.  Battle damage would not be repaired.

In November 1999 the Tank Museum created a website to track the restoration project.  This site featured monthly updates for four years.  This series of posts will republish some of the photographs and details featured on that site, and then bring the story of Tiger 131’s restoration up to date.

While progress continues on the engine it is not very photogenic; in the meantime let’s look at some details, starting with the turret.

Here we are looking across, from the Loader’s side towards the Commander’s position, although he would be hidden behind the black, metal blast shield.

In between is the recoil guard from the 88mm gun and a recoil distance indicator.  Braun ark reminds the crew that the recoil system contains a special lubricant which was ‘braun’ and suitable for cold ‘arktik’ conditions.

Looking down through the cupola we see part of the Commander’s seat and his blast shield on the right.  To his left the turret traverse control and further down the Gunner’s seat, traverse motor and control pedals.  Notice that you can see the red panel with the central lubrication terminals which are located below floor level, just outside the turret floor.

The rear turret exit hatch, showing the locking mechanism.  The warning sign is intended to prevent an accident – that hatch falls down with an impressive clang!

Other features are the turret extractor fan and stowage of spare vision blocks.

This angle looks down upon the loader’s seat, showing how the cushion pivots and the whole assembly can be folded back, out of the way. The bag to catch the empty shell cases can be seen, as can the Jerrycan holder on the floor.

Once you start taking a tank to pieces you begin to notice things that would not be otherwise obvious. Look at the view above and see if you can spot something odd.  This shows 131 after its return to England but look at the driver’s hatch. The periscope cover is at the back, which is unworkable, so why is that? It’s because this is the radio operator’s hatch from another Tiger, fitted to the driver’s side of 131. Any idea why?

Well the most likely explanation is that, when the tank was hit, the round which glanced off the underside of the gun did more damage than we might have thought. So, before it was shipped back to the UK 131 had this, and other details, attended to. The radio operator’s hatch is as it ought to be and is presumably, therefore, the original article.

At some point over the years a replacement driver’s hatch was fitted, which we can see here. Find out more about the Tiger’s hatches here. 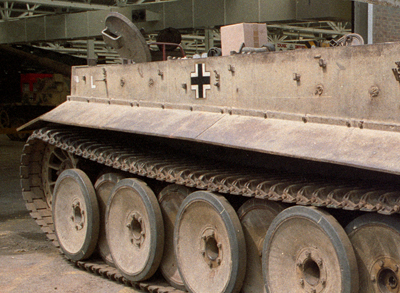 We were looking at the Tiger the other day and discussing the tracks.

It was noted that they are not mirror image (as on our early Tiger II) but identical, so that one is reversed in relation to the other.

We wondered if this was an oddity, bearing in mind the long history of our tank, but it seems unlikely since it was like this when the tank was captured and studying photographs of other Tigers suggests that this was standard procedure.

It is odd because the resistance of each track would be slightly different.

The problem is created by the fact that the wider battle tracks on Tiger extended beyond the outer sprocket ring, thus making the track lop-sided.  So in order to have both tracks fitted with the grouser trailing you would have to have a matched set, the extra problems of which are obvious.

Of course the problem did not apply with the narrower transport tracks, which were symmetrical, as shown here.

Yet another interesting Tiger conundrum.

Here is the ‘new’ engine, sitting on a stand at ABRO and under serious investigation.  Stripped right down to basics it appears to be in good condition, bearing in mind it is nearly sixty years old.

One aspect of the Maybach design that British investigators remarked upon was the compact nature of the engine, for a V-12.

This was achieved by clever design and skilled manufacture but it resulted in very thin walls between the cylinders.

Just how slim shows up well here, with the liners removed, you can see how close everything is.

A modest amount of corrosion, a slight fracture or a spot of porous metal in the casting and you have a problem, and it is one aggravated by age.

Engineers at ABRO are consulting various experts to find a solution, as ever we will keep you posted on progress.

See Part V: A Setback and a Repaint and Part VII: Battle Damage.